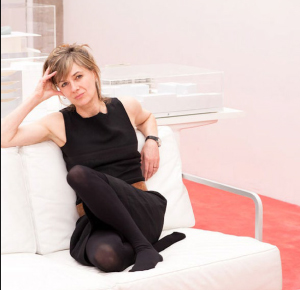 After a twenty year partnership with the late Jan Kaplicky at the radical, futuristic practice Future Systems, Amanda Levete founded her practice AL_A in 2009. Following on from extraordinary schemes including the Lords Media Centre and Birmingham Selfridges, the practice has continued the fluid, futuristic aesthetic. A new office building on Oxford Street launched the practice onto the London scene whilst an exquisitely flowing new concrete bridge at Dublin’s Spencer Dock has cemented their reputation. Other projects include a new subway station in Naples (in collaboration with artist Anish Kapoor), the Central Embassy tower in Bangkok and a new courtyard for London’s V & A. The door handle was initially instigated as part of Wallpaper* Magazine’s ‘Handmade’ collection and launched at the Milan Furniture Fair in 2010. Smooth and elegant, it is nevertheless deceptively simple – the rose is fixed to the door and only the grip rotates.