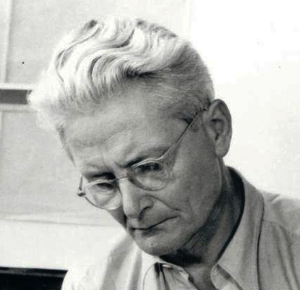 Wilhelm Wagenfeld’s (1900-1990) experience, first as student and then as head of the metal workshops of the Bauhaus, instilled in him an innate functionalism which informed the career of one of the twentieth century’s most understated yet influential product designers. The handle he designed in 1929 exudes a mechanistic, modernist rigour, its stripped-down design eloquently expressing the downward motion of the lever and the pivoting action of the spindle. After he left the Bauhaus, the Constructivist influence on Wagenfeld’s design waned and his products became more human and more ergonomic. The second door handle he designed (in 1966) embodies these changes. Wagenfeld’s influence can clearly be seen in the Ulm school and the designs of Dieter Rams, and then in the work of a subsequent generation of product designers from Jasper Morrison to Sam Hecht.